On 12 and 13 October 2018 the European Science Foundation’s Nuclear Physics European Collaboration Committee (NuPECC) celebrated 30 years of its existence and activities done in the service of the European Nuclear Physics community. The anniversary coincided with NuPEC’s 93rd plenary meeting, which was hosted by the Horia Hulubei National Institute for R&D in Physics and Nuclear Engineering (IFIN-HH) and the Extreme Light Infrastructure for Nuclear Physics (ELI-NP) in Bucharest, Romania.

ELI-NP was selected as a major facility in the field by NuPECC in their Nuclear Physics Long Range Plan in Europe. It will be the most advanced research facility in the world for photonuclear physics and its applications, with the most brilliant tunable gamma-ray beam in the world. ELI with its 3 pillars in Romania, Hungary and Czech Republic is also one of the prestigious European infrastructures at the ESFRI (European Science Forum for Research Infrastructures) Roadmap. 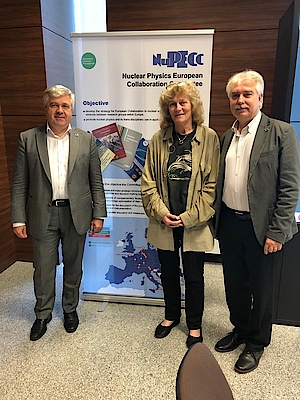 During the event, representatives of the member countries and institutions, current and former committee members and chairpersons gathered to review the past challenges and accomplishments by NuPECC: From its origin to the current status, from the ingenious simplicity of tasks and agendas of the first meetings to the complexity and richness of its actions in the recent years. Several presentations given by past and present NuPECC chairpersons showcased how the Committee has always adapted in order to address and overcome the challenges of the nuclear science in Europe. 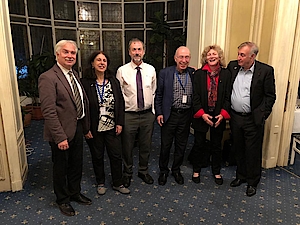 “Despite a tendency that exists in several European countries to concentrate only on national developments, the science, and in nuclear physics should be driven by European and international cooperation. NuPECC in his 30-year-old history had initiated and conducted activities fulfilling this principle. In the future, the Committee will concentrate all its efforts to play together with ESF a major and constructive role in this endeavour”, said Marek Lewitowicz, NuPECC Chair.

“NuPECC has been with the ESF since 1991, and we are proud to host this very important advisory structure that is representative of the broader nuclear physics community in Europe - a domain in which Europe is very strong - and also very visible world-wide. NuPECC is an authoritative body who can provide decision-makers with the required long-term view of the needs of its community and the opportunities offered by public investments in this domain", said Jean-Claude Worms, ESF Chief Executive, who attended the event.