The European Space Sciences Committee (ESSC)  welcomes the outcome of European Space Agency’s (ESA) Council Meeting, held on November, 27-28 in Seville, Spain,  and strongly supports the subscription of the science programmes by the Member States.

The European Science Foundation’s (ESF) Expert Committee on space sciences and Europe’s advisor on space science policy participated at ESA’s Council at Ministerial level Space 19+, the gathering of ESA’s Member States who shape ESA’s vision for the future of Europe in space. Representing the scientific community, ESSC addressed a statement to the delegations acknowledging the well-balanced strategy of the Space 4.0 program.

With an overall secured funding of €14.4 billion –the highest ever granted – ESA’s Member States have expressed their determination and common vision for a strengthened position of Europe in space. The ESSC considers this unanimous encouragement to be a strong signal, both in recognition of ESA’s scientific and technological successes, as well as in response to the balanced future strategy of the Space 4.0 program.

The agreed-upon budgets also introduce a welcome balance among the science-related directorates. The total subscriptions to the scientific programmes – Science, Human and Robotic exploration, Earth Observation – and to the pillars that deal with scientific issues (e.g. the Space Weather pillar for the Space Safety and Security programme and Basic Activities) amount to approximately half the final budget.

Athena Coustenis, Chair of the European Space Sciences Committee (photo below), highlights: “Positions taken by ESA Member States will reinvigorate and motivate European space scientists. Space research is now back on the Member States’ priority agenda and the community is committed to new exciting endeavours to better understand our planet, our Solar System and our universe”. 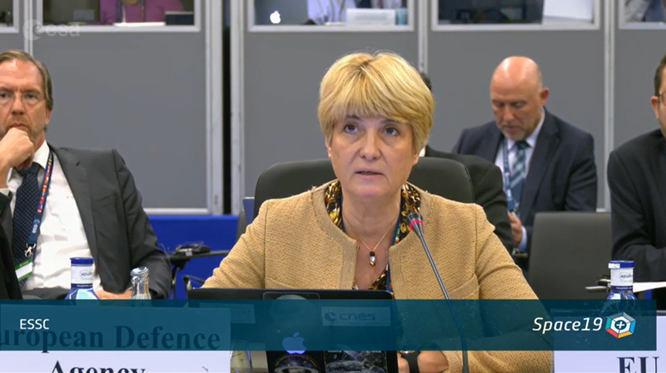 The Mandatory Science Programme has benefited from a substantial increase in resources with a budget of €2.83 billion. This commitment safeguards the Agency’s Cosmic Vision programme with its diverse portfolio of large, medium and smaller missions, as well as contributions in international partnerships. At the same time, it allows ESA to take the next important steps of the Voyage 2050 visionary programme.

The European Exploration Envelope Programme has been widely subscribed to, with a budget of €1.95 billion. This secures the European contributions in the extended International Space Station activities and paves the way for additional European astronaut missions and new scientific discoveries in life and physical sciences in space. It will also extend the reach of Europe beyond Earth, with inspiring human missions to the Moon and robotic return of samples from Mars.

Subscriptions to the Earth Observation programmes, with a budget of €2.54 billion, and the strong support given to the Copernicus programme, will ensure Europe’s position as a global leader in Earth sciences. Member States recognised the critical importance of space infrastructures in understanding and monitoring our planet, its geophysical processes and the environmental changes it is facing.

The ESSC warmly welcomes the initiation of the Space Safety and Security programme as one of the key elements of ESA’s future strategy. This programme will allow to monitor and mitigate potential threats from space. Dr Coustenis remarks: “The ESSC has led a dedicated study regarding the space weather aspects and emphasises that this effort is urgent and of global relevance in order to define an operational space- and ground-based network that measures essential space weather parameters. This will in turn drive the space weather predictions required to protect our society’s infrastructure”.

The ESSC also applauds the initiatives to empower the European NewSpace sector in all its components (access to space, innovative flexible exploration initiatives, microgravity platforms) and for all its actors (start-ups and large industrial companies), as this new paradigm will set the scene for interactions between science and industry and the production of scientific knowledge.

Nicolas Walter, Chief Executive of the European Science Foundation comments: “With these important decisions, European space sciences will contribute even more to a better integration of the European Research Area. ESA is reinforcing its position as a catalyst for its national communities as well as a leader, key actor and trustworthy partner at the international level”.

The European Space Sciences Committee, representing the scientific community, will continue to provide independent and unbiased advice to all actors involved in space activities. The committed funds will be instrumental for both Europe to achieve its full potential in scientific excellence and for Member States to accrue the socio-economic benefits inherent to space research. The Committee will follow closely and with great interest the implementation of the programmes.

European Science Foundation (ESF) – Science Connect: ESF is an expert science services organisation that provides a strong contribution to the concrete development of the European Research Area. It is building on core strengths developed over 45 years in research evaluation and project supervision and management. ESF hosts three Expert Boards (including the ESSC) and the Europlanet Society, which provide in-depth and focused scientific expertise in selected disciplines.

European Space Sciences Committee: The European Space Sciences Committee (ESSC), established in 1974, grew from the need to give European space scientists a voice in the space arena at a time when successive US space science missions and NASA’s Apollo missions dominated space research. More than 45 years later, the ESSC actively collaborates with the European Space Agency (ESA), the European Commission, national space agencies and the ESF Member Organisations. This has made ESSC Europe’s most prominent space advisory body. The mission of the ESSC today is to assemble an independent forum for scientists to discuss space science issues and provide advice to the different stakeholders. The ESSC is represented ex officio in all relevant ESA scientific advisory bodies, it has members in the EC space advisory structure, and it has observer status at the ESA Ministerial Council. At international level, ESSC maintains strong relationships with the US National Academies Space Studies Board. The ESSC is the European Science Foundation’s (ESF) Expert Committee on space sciences and the ESF’s interface with the European space community.