The ESF’s Nuclear Physics European Collaboration Committee (NuPECC) has launched today its fifth Long-Range Plan (LRP 2017) for nuclear physics in Europe. This was marked formally at an event in the Brussels-based University Foundation. The event was attended by leading figures from the worlds of research, academia and European institutions.

NuPECC's mission is “to provide advice and make recommendations on the development, organisation, and support of European nuclear research and of particular projects”.

The process for preparing this LRP was initiated by NuPECC at its October 2015 meeting held in GANIL, Caen, France. It defined the subfields of nuclear physics to be addressed and established working groups spanning the areas of nuclear physics and its applications, namely Hadron Physics, Phases of Strongly Interacting Matter, Nuclear Structure and Dynamics, Nuclear Astrophysics, Symmetries and Fundamental Interaction as well as Applications and Societal Benefits. Two Conveners and three Liaison Members of NuPECC were assigned to each working group, which members were selected to provide a broad representation of specific topics in the subfields. The working groups were given the charge to delineate the most promising physics in their subfields, to highlight recent achievements, and to discuss future perspectives. 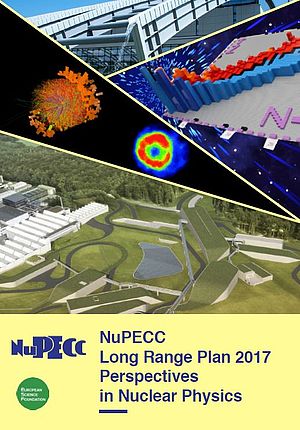 A Town Meeting to discuss the NuPECC LRP was held at the “Darmstadtium” in Darmstadt, on January 11 – 13, 2017. It was attended by almost 300 participants, including young scientists. The programme contained sessions on future large scale facilities and on the European and international context, including presentations from NSAC (USA), ANPhA (Asia) and CERN.

The result of this effort is the present report “NuPECC Long Range Plan 2017: Perspectives for Nuclear Physics”. It features recommendations from NuPECC and the nuclear physics community for the development of nuclear physics research in Europe followed by a comprehensive chapter on large and smaller facilities, existing, under construction or planned, and by reports from the working groups.

The event was introduced by Professor Angela Bracco, Chair of NuPECC, who highlighted the fact that Europe has a leading position in nuclear physics research. She indicated that it is through the collaborative effort of the European community that it is able to maintain such a position and advance it further. This Long Range Plan was established in a concerted action by the whole European nuclear physics community and its representative committee NuPECC-ESF. Professor Bracco said“It is strongly hoped that this plan will be well exploited by the European funding agencies to seek avenues for accomplishing the objectives outlined in the recommendations, in particular also those that go beyond the capabilities of an individual country”.

The European Science Foundation was represented by its Chief Executive, Dr. Jean-Claude Worms, who said “The European Science Foundation has been supporting the work of NuPECC since 1991, the year of the publication of the first LRP for nuclear physics. We are very proud to host such a prestigious expert committee, which can garner the collective wisdom of nuclear physicists and related scientists in Europe, with strong established collaborations world-wide”.

Note for Editors
The Nuclear Physics European Collaboration Committee (NuPECC) is hosted and administered by the European Science Foundation (ESF). NuPECC’s aim is to promote collaborative ventures between nuclear physicists within Europe and particularly from countries linked to ESF. The mission of this Expert Committee is to (i) strengthen European collaboration in nuclear physics; (ii) define a network of complementary facilities within Europe and encourage their optimum usage; (iii) provide a forum for discussion of the provision of future facilities and instrumentation; and (iv) issue recommendations on the development, organisation and support of European nuclear physics and particular projects.

The European Science Foundation (ESF) is based in Strasbourg, France, and it was established in 1974 as an independent, non-governmental, non-profit organisation to provide a common platform for its Member Organisations to collaborate internationally on research programmes through its networking, funding and coordination activities. The launch of Science Connect, the new expert services division of ESF, marks the next phase of this development, borne out of the ESF deep understanding of the science landscape, funding context and needs of the research community at this critical juncture.